Felice, member of Middle East Crisis Response, talks about the history of Israel/Palestine


"Wednesday Walk for Black Lives event at Academy Green in Kingston. The theme of the event was 'Free Palestine,' and dozens of people participated despite the threat of rain. (Lightning ultimately forced the event to end early.) Speakers, lined up by Jewish Voice for Peace/Middle East Crisis Response, included Palestinians, Muslims and Jews." Kingston Freeman 6/10/21
at June 11, 2021 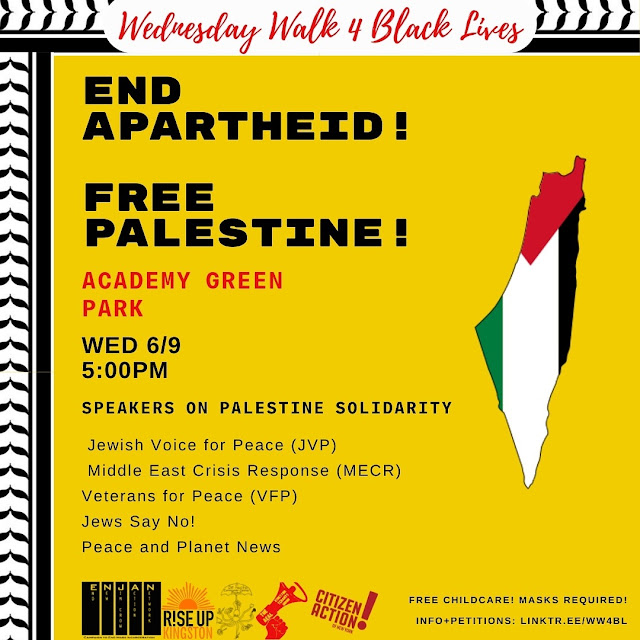 Jewish Voice for Peace/Middle East Crisis Response will present a handful of speakers including Palestinians, Muslims and Jews. They will give brief overviews of the region’s history, current political situation and Palestinians’ resistance to Apartheid Israel.
The weekly Wednesday Walk for Black Lives is a coalition of grassroots organizations including ENJAN, Rise Up Kingston, Citizen Action and Real Kingston Tenants Union. 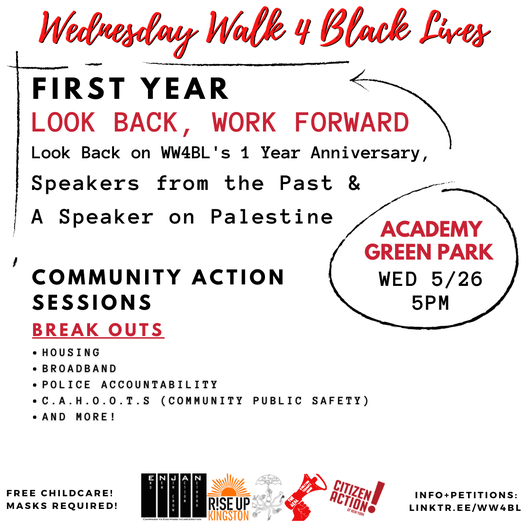 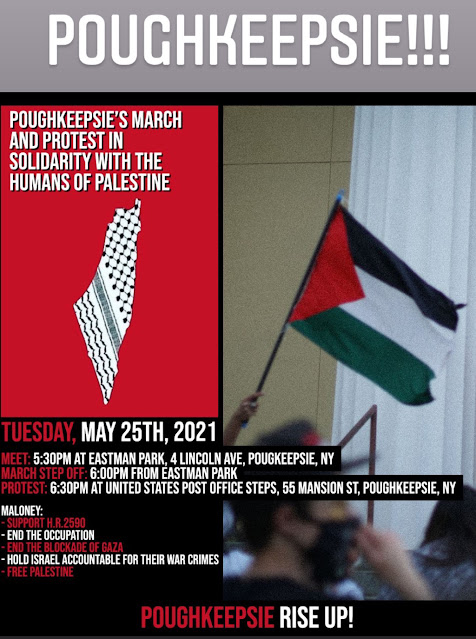 Eastman Park is behind the old YMCA. If you want to attend just the rally at the Post Office, there is limited parking on the side-streets, else you can use the parking garage on Market Street and Main across from the Mid-Hudson Civic Center, and walk 2 blocks north. 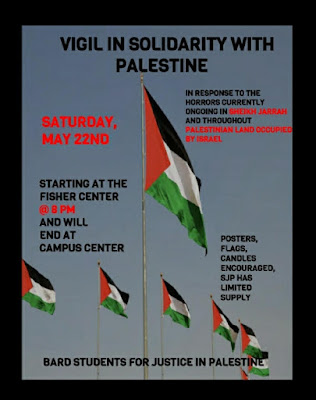 Students for Justice in Palestine will be having a rally at Bard College against Israel's human rights violations in the West Bank and Gaza. The students plan to meet at the Fisher Center this coming Saturday night (May 22) at 8 pm. All community members are welcome to join the event.

For the Fisher Center, enter the Bard campus at Route 9G and Annandale Road. Please note: The center is at 60 Manor Avenue, NOT 60 Manor Road as Google Maps may indicate.
at May 20, 2021

New Paltz Women in Black has decided to continue calling the events in Israel/Palestine to public attention as long as the Israeli bombing continues and the pogroms are still occurring. So we will be vigiling for Palestine again this Saturday at 12:45-1:30, in front of the New Paltz Elting library on Main Street. Although we are sending out this notice to our larger list, we don’t expect the same turnout as last week’s 80-100 people, and we are not planning to have speeches, just to stand with our signs and banners. You are welcome to join us.

Please share this information with JVP-HV and Vets for Peace.

We had no shortage of people coming out to protest Israel's racist military actions in the West Bank and Gaza. There were over 80 who gathered to protest Israeli apartheid and US complicity in these horrendous war crimes. MECR joined JVP-Hudson Valley, Vets for Peace, and Women in Black to hold this vigil and teach-in about the issues.
It is a shame that Rep. Delgado has said or done nothing so far. Part of it must be the free trip he got to Israel at the beginning of his term. Another part is the financial support he gets from the Israel Lobby. He received over $30,000 from the lobby this last year. But our progressive champion is nowhere to be seen in many areas, like universal healthcare, the Green New Deal, and efforts to trim the defense budget. And he certainly is PEP, progressive except for Palestine.
Can't the Democratic Party do better than that? Isn't it time to talk about running someone else in the next primary?
at May 17, 2021

For details on how you can get involved with MECR, please contact us:

Get an Email When There Is a New Post